Music for the Anniversary Worship

With notes from Sunday's bulletin

This page contains music written for the the worship service celebrating the 250th Anniversary of Home Church. Most of the music was performed during the Sunday worship on Nov. 14, 2021. The final celebratory piece by the Gregor BellChor, was performed as the prelude on Nov. 21. 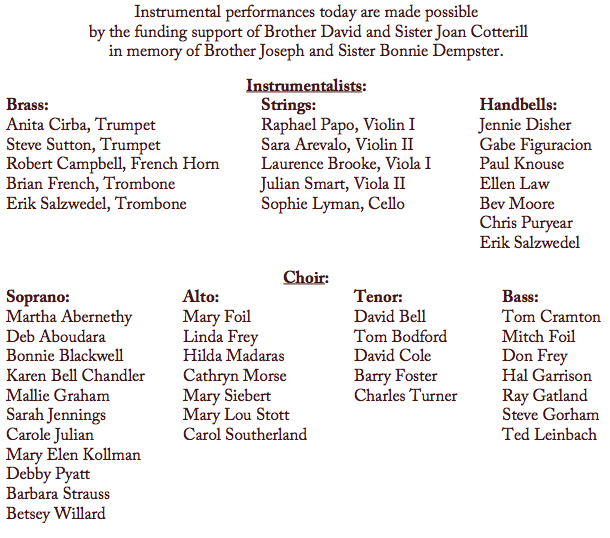 TWO ORGAN SETTINGS on “To God Alone on High be Glory”

Wayne Wold is an active composer, author, performer, church musician, and clinician. He is currently Director of Music Ministry at First Lutheran Church in Ellicott City, Maryland, and Adjunct Associate Professor of Music (organ) at Shenandoah Conservatory of Shenandoah University in Winchester, Virginia. He has published over 400 works, including hymn tunes that appear in hymnals in the U.S. and Australia.

The tune, Confession (Moravian Book of Worship [MBW] 675), has no identifiable composer but was written in Herrnhut around 1735 and was included in the Christian Gregor 1784 Choralbuch.

Erbe was born in Berne, Switzerland, where his father was a Moravian minister. He was educated in Herrnhut, was a regular church organist when he was fourteen, and was such an accomplished musician that at age seventeen his entry in a musical contest was returned because the judges thought it must have been written by a teacher. He came to America when he was 35 and spent most of the rest of his life in St. Louis, serving as organist in several congregations of the Evangelical and Reformed Church, supplementing his income as a bookkeeper. His works include organ and piano pieces, string quartets, solos for men, a cantata, and numerous anthems. Erbe’s manuscripts were donated to the Moravian Music Foundation by his daughter in 1978. This chorale prelude would have been an appropriate introduction to the congregational hymn.

The Van Vleck setting is a good example of the style of accompanying congregational hymn singing that became somewhat popular during the early 19th century where an embellished bridge of notes was played between each phrase of the hymn.

The piece played today was found at the Moravian Music Foundation in a book with “L.C. Van Vleck” on the cover, which would be Louisa Cornelia. Her name is nowhere on any of the pieces in the book so it cannot be confirmed as being by her. At this time the actual composer has not been identified.

Composed in celebration of the 250th anniversary of Home Moravian Church.

A member of Home Moravian Church, Erik Salzwedel is Director of the Gregor BellChor. He has been the Bass Trombonist of the Winston-Salem and Greensboro symphonies since 1986 and performs with the North Carolina Symphony, Charlotte Symphony, Camel City Jazz Orchestra, and others. Erik is Business Manager of the Moravian Music Foundation. Formerly, Erik was Manager of Corporate and Foundation Relations for the UNC School of the Arts; Executive Director of Arts United for Davidson County (Lexington); Director of Education for the Winston-Salem Symphony; and Production Manager/Librarian for the Greensboro Symphony. Erik holds degrees from UNC School of the Arts, Stony Brook University, and Forsyth Tech. He is the proud father of Hannah S. Rau and Eve Salzwedel, and loving husband to Mary Elen Kollman.

He writes,“The sonorous tones of the trombone connect me to my German/Moravian roots, and chorales of the Unitas Fratrum often provide the subject matter for my music. While the majority of my compositions are for solo instrument and organ/piano, or organ alone, I have written extensively for brass and handbell ensembles. The impetus for composing and arranging my own music arose from a desire to open the sanctuary doors to a wider variety of instrumental ensembles, and my own practical need for appropriate trombone and handbell music to play in worship.”

About this piece, Erik writes: “With High Delight, Let Us Unite (MBW 368) for brass uses the ancient hymn tune Mit Freuden Zart and explores music as a reflection of Christian life. The music represents a sense of journey, guided by the Holy Spirit, and illustrates a variety of ideas and approaches to congregating and forming the Body of Christ. The music conveys the circumstances of searching, seeking, and the uncertainty of new environs, which were ubiquitous in the Unitas Fratrum throughout much of its history; think of refugees arriving at Zinzendorf’s estate, or Moravians arriving in Wachovia or in a new mission area. At times, the music is resolute; at other times, it changes course with the introduction of new ideas or perspectives. Individual voices are heard (polyphony), that then blend and modulate to form consensus (homophony). As often occurs in our worship and fellowship, a hymn tune becomes the catalyst, drawing us closer to each other and to the Savior. In true Moravian fashion, the piece ends in triumphant, but unostentatious praise for our Lord and Savior’s grace and mercy.”

Johann Friedrich Peter (1746-1813) lived in Salem from 1780 to 1790. The majority of Peter’s compositions consist of sacred anthems for choir and instruments. In addition to his sacred music he wrote six expertly crafted quintets for two violins, two violas, and a violoncello which are among the earliest examples of chamber music known by a North American composer. Peter dated the full score January 9, 1789. Today we will hear the first movement (“Vivace assai”) of his String Quintet #4 in C Major.

Peter wrote only a few short solo anthems for soprano and strings. Der Herr ist in Seinem heiligen Temple (The Lord Is in His Holy Temple), Habakkuk 2:2, was composed in Salem for use on November 13, 1786, the 15th anniversary of the congregation’s founding.

Commissioned in celebration of the 250th anniversary of Home Moravian Church, with funding support by Brother David Bell in memory of Sister Kate Arndt Bell

Jill Bruckart is a member of College Hill Moravian Church in Bethlehem, PA. She has been an organist and church musician since the age of 15. She has led choirs of all ages and has worked with a variety of musical groups including all-male vocal groups, children’s choirs, brass choirs, string orchestras, contemporary and rock bands, and handbell choirs. She has served as Conductor and Music Director of the Unitas Chorale of Bethlehem, PA, from its founding in 1996 through the 2010-2011 season.

Her compositions include music for adult choir and children’s choir, hymn tunes, and handbell arrangements based on Moravian tunes. She is a 2012 recipient of the Music Foundation’s Moramus award.

The text for the work is “Es segne uns,” a hymn text written by Zinzendorf. “Es segne uns” was the first hymn sung by the Salem Congregation in their worship on November 13, 1771, the founding day of the congregation. In addition to the choral work, Sister Bruckart has composed a new hymn tune for this text.

She writes: “I was thrilled (and a bit frightened) to accept the commission for Home Church. Glenn Siebert has always been gracious to try out things I have sent him over the years. “I was anxious to have a text, and perhaps a tune, to work with.The text arrived in May. ‘Now Bless Us Richly, God Our God,’ as translated by Nola Knouse and Daniel Crews, is a great text. I knew the tune assigned to it, but didn’t feel that it would lend itself well to my anthem. ‘Peace’ was the word that caught my attention. I wanted to offer something peaceful, yet also emote strength and celebration.

“I normally write to a text, and, after some false starts, a melody began to appear. Then a second melody, introduced by the male voices, emerged. As usually happens, I didn't know how all this would evolve. I was pleased to be able to mix the two melodies in the fourth verse – my favorite! I worked through the text, adjusting for how it would lie in the musical line. Eventually, I quite rewrote the text altogether, while trying to retain the original meanings.

“As the anthem introduced itself (sometimes music asserts its own way!), I could hear the tolling of the high bell. I knew then that the piece needed a section with a handbell presence. And, since we are Moravians, and can't be without our trombones, I wanted to include a small brass group to create more celebration and joy as the last verse offers our praise to God. ‘Peace’ is the final message with the tolling of the bell and quiet closing chords…perhaps an Amen.

“Interestingly, the hymn tune I provided, ‘Salem Home,’ was written during and after the anthem, and has quite an unusual meter: 7.7.7.5. The anthem was not created from the hymn. It seems to be a melody that returns to my thoughts often, so I hope it will have endurance for the future and be a blessing to the singing congregation.”

Carlyle Sharpe (b. 1965) is Professor of Music in Composition and Theory at Drury University in Springfield, Missouri. A recipient of the Drury University Faculty Award for Excellence in Scholarship, his cantata Proud Music of the Storm was featured on the National Endowment for the Arts “American Masterpieces” concerts with the Providence Singers and was also performed by the Washington Chorus at the Kennedy Center. The Providence Journal called this work “the smartest, most well-crafted offering” and an “intense imaginative score,” and the Choral Journal noted, “Sharpe has created a worthy addition to the repertoire.” Confitemini Domino won the 1998 Holtkamp / American Guild of Organists Award in Organ Composition.

The piece is a setting and harmonization of two very old tunes that convey central values of our Christian life and theology. These alternating tunes may not be the most familiar to us, but are easily heard in the highest bells throughout the piece.

O Christ, Our Hope, Our Heart’s Desire (hymn #374) is heard first. The tune was constructed from a Gregorian melody by Nikolaus Hermann, a teacher from Bohemia, in 1554. The text is anonymous, Latin, eighth century, and was translated by John Chandler in 1837. The tune, Lobt Gott Ihr Christen (Praise God, Ye Christians) was chosen for its emphatic repeat of the last musical phrase.

The text for The Word of God, Which Ne’er Shall Cease (hymn #509) is by Petrus Herbert (1566), a bishop of the Unitas Fratrum, and was translated by John Swertner, an English Moravian pastor, in 1789. Five stanzas were used for the 1923 Hymnal (trans. Louis Kampmann) and the 1995 MBOW. The text assures all of grace, peace, mercy and healing and is set to the tune Des Herrn Wort (The Word of God) from the 1566 Bohemian Brethren’s Hymnal.