Home > Who We Are > Our History

The Moravian Church had its origin in ancient Bohemia and Moravia, in present-day Czechoslovakia. The church's first members were the forerunners of what became known as the Protestant Reformation. They were the followers of the great preacher and educator John Hus (1369-1415) of the University of Prague. Hus was martyred for his religious beliefs.

The Moravian Church, or the Unitas Fratrum (Unity of Brethren), arose as followers of Hus gathered on the estate of Lititz, about 100 miles east of Prague, and organized the church – 60 years before Luther and 100 years before the establishment of the Anglican Church. By 1467 the Moravian Church had established its own ministry.

The Moravians placed high value on learning. When the printing press was invented in 1454, the Unitas Fratrum bought one and opened a publication office in Jungbunzlau. By 1510, they had published at least 50 of the 60 works that appeared in Bohemia. From 1579 to 1593, they translated and published the entire Bible.

During a lengthy period of religious persecution, the Moravians eventually came under the leadership of John Amos Comenius (1592-1670), Czech educator and bishop. He became world renowned for his progressive views on education and was offered the first presidency of Harvard University. Comenius, however, never came to America, living most of his life in exile in England and Holland where he died. His prayer was that some day the "hidden seed" of his beloved Unitas Fratrum might once again spring to new life.

The 18th century saw the renewal of the Moravian Church through the patronage of Count Nicholas Ludwig von Zinzendorf, a nobleman in Saxony. Some Moravian families, fleeing persecution in Bohemia and Moravia, found refuge on Zinzendorf's estate in 1722 and built the community of Herrnhut. The new community became the haven for many more Moravian refugees. Count Zinzendorf encouraged them to keep the discipline of the Unitas Fratrum, and he gave them the vision to take the gospel around the world.

The Moravians established the settlement of Bethlehem (Pennsylvania) in 1741. A few years later, Bishop Augustus Spangenberg led a party of men to survey a 100,000-acre tract in North Carolina. The tract became known as Wachau (Wachovia) after an Austrian estate of Count Zinzendorf. In Wachovia, Bethabara, Bethania and Salem (now Winston-Salem) became the first Moravian settlements in North Carolina.

Home Moravian Church was established in Salem on November 13, 1771.

The sanctuary building itself, with its distinctive belfry, was completed in 1800, to which the Rondthaler Building (named for a prominent bishop) was added years later. The Sanctuary underwent a major renovation in 1913. A Christian Education and Fellowship Hall building was built prior to World War II.

Salem was to be the industrial and administrative center for the Moravians in North Carolina. Its economy and nurturing groups would enable mission work to go forth to the Cherokees in northern Georgia and other peoples. Home Church established Sunday schools and worship places in many areas of what became Winston-Salem. Those became churches that are part of what is now called Salem Congregation.

Find much more history on the website of the Moravian Church Southern Province. 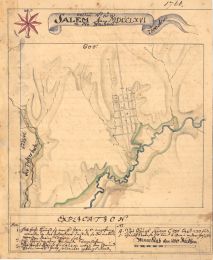 Courtesy of The Moravian Archives