Tom Haupert introduced the program, asking Fran to share about her life and especially those times that she felt that God had had a hand in her life.

Fran told us about her childhood during the Depression on a farm outside of town (Green Bay, Wisconsin). The farm had no running water or sewer service. Fran learned to do without these conveniences and to work hard, mend and make clothes, and tend animals.

At the Moravian church camp, Fran felt an impulse to dedicate her life to Christian service. After high school, Fran worked as a telephone operator, which gave her money to pay for her first year of college, studies which she completed at a teacher training college.

Fran was then asked to serve in Alaska at the Moravian Children’s Home, which was very isolated. During furloughs, Fran attended the Moravian Seminary in Bethlehem, Pennsylvania, and later graduated from Presbyterian School of Christian Education with a Master's Degree. 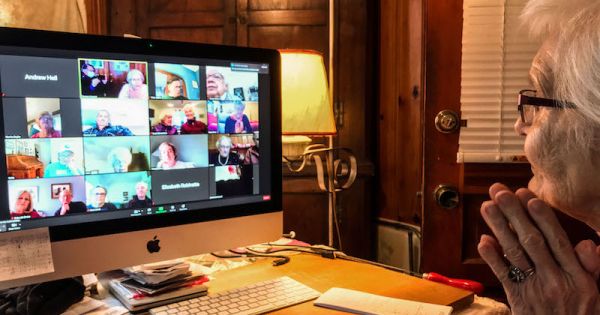 She worked as Director of Christian Education at the Lititz Moravian congregation in Pennsylvania and later in the same capacity at Home Moravian Church beginning in 1977.

Fran suggested that we call or write to our members who are unable to be with us on Zoom so that they will know we are thinking of them.

P.S. A special thank you to Tom Haupert for your “expert help” with our programs and computer issues. We LOVE the special picture that Tom has included with this report!

Join us THIS WEEK as Senior Friends hears – and hears about – dulcimers.