Home Moravian Church has had six pipe organs since its founding in 1771. Four of those are still in service. 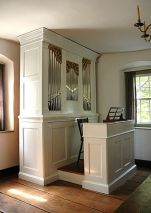 The congregation’s 1798 one-manual, five-stop David Tannenberg organ (right) was originally installed in the old Salem Gemeinhaus and replaced the 1772 Bulitschek organ. The 1798 Tannenberg is currently located in Old Salem’s Single Brothers’ House and is played during Candle Tea and on other occasions. Read about the organ's restoration. 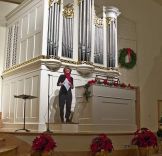 The first organ installed in the church sanctuary, which was completed in 1800, was this two-manual and pedal, 13-stop David Tannenberg organ (left, with Susan Foster). It served in the sanctuary for 110 years! The beautiful old organ underwent a complete restoration in 2003-04, and is now located in Gray Auditorium of the Old Salem Visitors’ Center, where it is played for several occasions during the year.

Between 1910 and 1913 the sanctuary underwent a major renovation. Most of the features that you see today were from that project. At that time the 1800 Tannenberg organ was removed and replaced with a 1913 Kimball organ (right) with a tubular pneumatic action. Most of that Kimball went to another church when it was replaced by the current organ in 1959. Details about the Kimball organ.

Our current sanctuary organ (left) is a 1959 Aeolian-Skinner opus 1340 with three manuals, pedals and 43 stops. Details of the organ.

(Thanks to Hal Garrison for compiling this history of Home Church's pipe organs.) 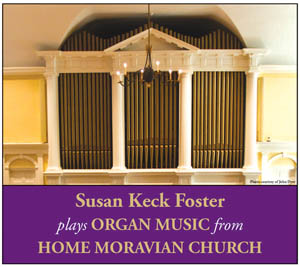 A new CD of music on the 1959 Aeolian-Skinner by Susan Keck Foster is available.  Order yours online today!